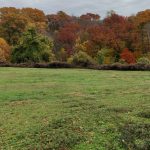 Joseph Patterson, the founder of the New York Daily News, followed a long line of previous owners of the current Mariandale property in Ossining, New York.

He built a home and the pool on the land in the 1930s, with a caretaker’s farmhouse, two barns, a large greenhouse, a carriage house, and a “warming house,” adjacent to a skating rink.

After Patterson died in 1946, the land was acquired by the Archdiocese of New York.

The Dominican Sisters in Ossining

The Dominican Sisters of the Sick Poor arrived in Ossining in 1950, after buying the former Patterson estate. Shortly after they arrived, the Sisters began providing free home nursing services to the sick and poor in the Ossining area.

In 1954, the convent grounds were renamed and dedicated as Mariandale. As the Dominican Sisters of the Sick Poor continued to grow, a larger building was built and formally opened in 1966.

The original idea for the Retreat and Conference Center came about as a result of a meeting called by Sr. Paracleta Sweeney of Blauvelt in February of 1976. The meeting’s purpose was to explore the possibility of establishing a place where Dominicans in this geographic area could come together to pray, study, and reflect on current issues in light of their charism. The founding congregations were:  Amityville, Blauvelt, Caldwell, Newburgh, Ossining and Sparkill, along with the Province of St. Joseph. The Center opened on September 8, 1976, providing planned programs, retreats, days of recollection, and lectures.

Throughout its history, Mariandale and its grounds overlooking the beautiful Hudson River has been a place of hospitality, reflection, and peace.