Several elements in the chapel that appear to be abstract are, in fact, representations of Church teachings. The reredo 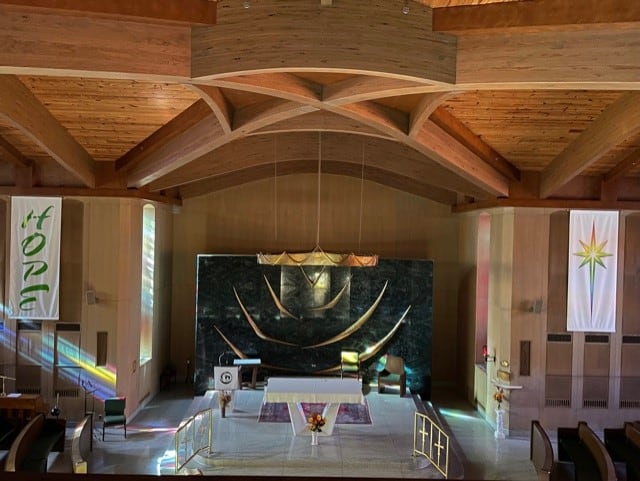 s, the ornamental partition wall behind the altar, is adorned with modern, hammered-brass arms. These represent the seven gifts of the Holy Spirit: wisdom, understanding, counsel, fortitude, knowledge, piety, and fear of the Lord.

An outstanding feature of the Chapel is the stained glass. The four windows in the vestibule relate to the apparition of the Blessed Virgin at Banneux in Belgium in 1933, when she stated “I am the Virgin of the Poor.” This is one of the sources of inspiration on which the work of the former Dominican Sisters of the Sick Poor was based.

The windows  at either side of the white marble holy water font depict the sacrament of baptism, which brings us into the faith community, and the sacrament of penance, which reconciles us with God and with one another.

The stained glass windows on either side of the main seating area depict “The Creed” in abstract form, bringing the glory of the colors into the chapel itself to create a joyous atmosphere for the celebration of the liturgy.

Window 1:  I Believe in One God the Father Almighty

Window 2:  Maker of Heaven and Earth

Window 3:  And I Believe in One Lord Jesus Christ the Only Begotten Son of God

Window 4:  And He Became Flesh by the Holy Spirit of the Virgin Mary and Made Man

Window 5:  He Was Also Crucified for Us

Window 7:  And Was Buried

Window 9:  He Ascended into Heaven

Window 10: I Believe in One Holy Catholic and Apostolic Church…I Await the Resurrection of the Body

At either side of the altar are windows carrying themes of the Eucharist (11) – the wheat of the bread, and the grapes (12).