Enjoy this lovely, peaceful Lenten Taize Prayer session that was held at Mariandale and online on March 31, 2021, led by Sr. Nancy Erts and Sr. Linda Rivers.

Ecological Stations of The Cross 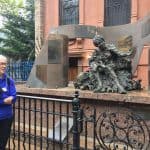 In honor of the 100th anniversary of women’s suffrage in the United States, please join us for a virtual walk through both African American Harlem and Spanish Harlem.

We will stop at the places where accomplished women, ranging from iconic to not so familiar, are honored. Stops include named buildings, murals and mosaics, plaques on the sidewalk, and commemorative street corners. And the women range from A’Lelia Walker to Nicholasa Mohr to Zora Neale Hurston. The tour is about 50 minutes with slides and live commentary, followed by Q&A.

Tour Guide Leigh Hallingby is licensed by the City of New York to be a tour guide. Leigh has long been passionate about exploring New York City’s vast array of neighborhoods on foot. After a long and rewarding career as a non-profit librarian, Leigh now loves being a tour guide and has developed a special interest in showing the Audubon Mural projects in Washington Heights, NY.

Climate Change and the Audubon Mural Project: A Virtual Tour with Leigh Hallingby

Join tour guide Leigh Hallingby as we explore the Audubon Mural Project (“AMP”), a grass roots project to create murals of climate-threatened birds throughout John James Audubon’s old Harlem‐based neighborhood in New York City. The project is inspired by the legacy of the great American bird artist and pioneering ornithologist and is energized by Audubon’s groundbreaking report “Survival By Degrees.” The tour takes place in the Hamilton Heights area of New York City. Please enjoy!

Each Thursday, from 11:30am to noon, we gather as spiritual companions seeking God’s guidance. Come join us in prayer for peace, for yourself, for others, and for the world.

Contemplation, according to Walter Burghardt, S.J., means taking a long, loving look at the real. Utilizing the cultures out of which the bible emerges, we will take a long loving contemplative look at the Sunday scriptures in order both to understand them, and discern how we are called to live them 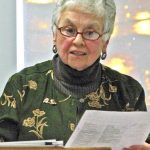